How a Big Mac affects your body in 1 hour

With more than 36,000 restaurants around the globe, chances are you have eaten at a McDonald’s at one point or another, and many of you are likely to have indulged in one of the chain’s most popular offerings: the Big Mac. It goes without saying that, although tasty, the Big Mac is not the healthiest food option. And now, a new infographic claims to show exactly what this world-famous sandwich does to our body within an hour of eating it.

A Big Mac contains 540 calories and 25 grams of fat. Consuming this sandwich alone – without the fries and soda that often accompany it – makes up more than 25% of an adult’s daily recommended calorie intake and over 40% of the recommended daily fat intake.

The sandwich also contains 940 milligrams of salt – the majority of the 1,500 mg daily salt intake recommended by the American Heart Association.

While most of us are aware that eating this sandwich is unlikely to be good for us, the nutritional values of food are often put to one side in favor of taste and convenience; around 50 million Americans each day visit fast food restaurants, with more than a fifth indulging in fast food twice weekly.

But would you be deterred from opting for such foods if you knew what they did to your body after consumption?

The website Fast Food Menu Price has created an infographic claiming to show how a Big Mac affects the body 10, 20, 30, 40 and 60 minutes after eating it.

The sandwich – like other “junk food” – will also trigger the release of brain chemicals such as dopamine, which activate the brain’s reward system and provide a feeling of pleasure. The infographic says this is comparable to the effects of cocaine.

After 20 minutes, addictive ingredients such as high-fructose corn syrup – present in high levels in the Big Mac bun – and sodium will set in, making us crave more, according to the infographic.

After another 10 minutes, the high salt content of the Big Mac begins to take its toll on the body, leading to dehydration. Because symptoms of dehydration are similar to those of hunger, the infographic warns that you may want more food at this point. 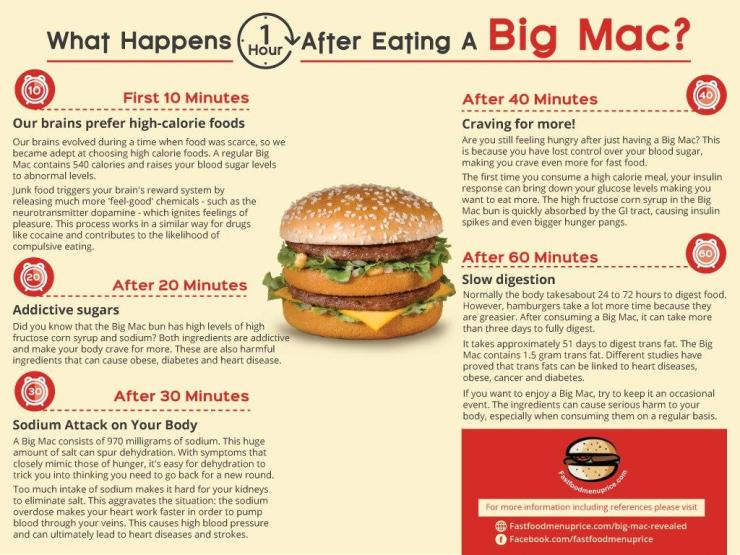 This infographic explains how a Big Mac affects the body within 1 hour of consumption.
Image credit: Fast Food Menu Price

However, Tew disagrees with this fact. “I just converted 970 mg in sodium and it works out as 2.4 g of salt,” she told The Independent. “It’s not enough to cause dehydration in my opinion. But it is a salty food so it’s good to be aware.”

If you often feel hungry just after eating a Big Mac, this may be due to body’s inability to control blood sugar.

“The first time you consume a high-calorie meal, your insulin response can reduce your glucose levels making you want to eat more,” the infographic explains. “The high-fructose corn syrup in the Big Mac bun is quickly absorbed by the GI [gastrointestinal] tract, causing insulin spikes and even greater hunger pangs.”

Possibly the most shocking claim the infographic makes about a Big Mac’s effect on the body is that it can take more than 3 days to fully digest because of its fat content; the body normally takes around 24-72 hours to digest food.

However, Tew believes that while fatty foods do take longer to digest, the 3-day time frame for a Big Mac is likely to be an exaggeration.

While nutritionists and health experts have questioned the accuracy of this infographic, there is one thing they all agree on: a Big Mac should be consumed in moderation.

“If you want to enjoy a Big Mac, try to keep it an occasional indulgence,” the infographic concludes. “The burger’s ingredients can cause serious harm to your body, especially when you consume them on a regular basis.”