What do the colors of a bruise mean?

Bruises happen when small blood vessels in the skin are damaged. Over time, a bruise changes color as the blood under the skin breaks down, and as the bruise heals.

Bruising typically occurs when a person receives an injury to an area of their skin, such as from falling or bumping into something.

The blood vessels between the skin and other tissues in the body burst. The blood pools under the surface of the skin, causing a bruise. It is natural for a bruise to change color during the healing process.

Read on to learn more about the usual cycle of bruising, and when a person should see their doctor about a bruise, for example, when it does not heal, returns or the pain intensifies.

Bruise colors over time and their causes

A person may be able to estimate how old a bruise is from the color. As the body heals and breaks down the hemoglobin, or compound that gives blood its red color, the bruise will change in color. This is a regular part of the healing process.

However, skin color affects the appearance of a bruise. Those with medium skin tones had more red and yellow to their bruises, while darker skin tones displayed darker bruises.

During the healing process, a bruise will usually go through the following colors:

Finally, once the bruise has turned a light brown, it will begin to fade. Most bruises will disappear without treatment within about 2 weeks. 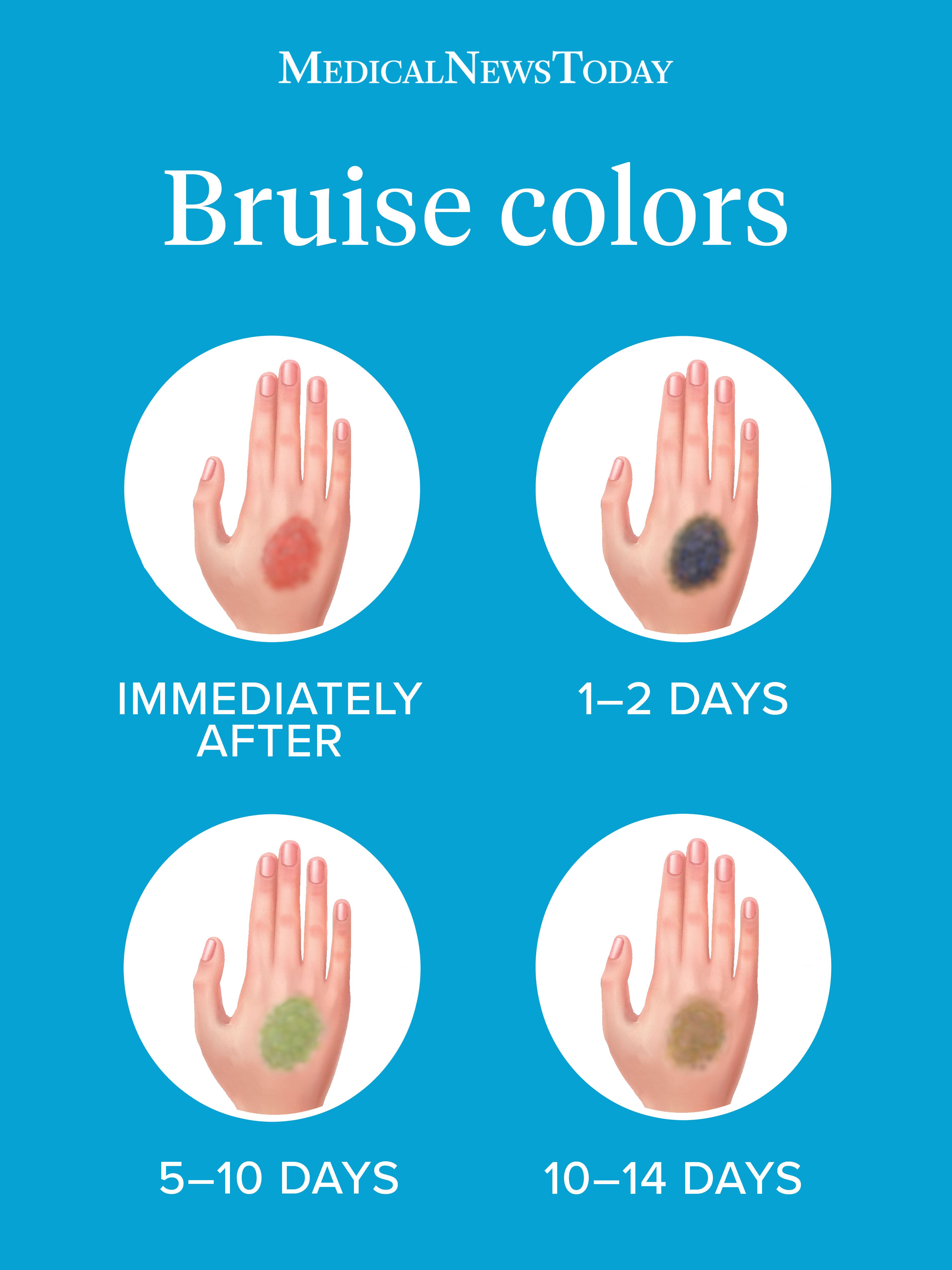 When to worry about bruises

Bruises are not typically something to cause undue worry. Often, they are a surface injury that requires no medical attention, and people can treat them at home.

But, in some cases, a person may want to seek medical attention for their bruising.

One common issue is a hematoma. A hematoma is a large collection of blood that becomes trapped within tissues. It is often related to more significant trauma.

When a hematoma occurs, the body cannot heal the bruise as easily or quickly as a minor injury. As a result, a hematoma stays the same color, firmness, and causes the same level of pain even after several days.

A person may need medical attention to find out if the hematoma requires further treatment.

The location, size, and cause of the hematoma will determine how to treat it.

Some of the warning signs that a person needs medical attention include bruising that:

How to speed up healing

People may want to try to speed healing or lessen any pain associated with bruising. There are some potential at-home methods they can try, as described here:

Use an ice pack

One of the first steps to helping a bruise heal is to apply ice to the area. People can ice the area with anything frozen, such as a freezer pack or a bag of frozen vegetables.

Wrap the cold object in a towel or cloth and apply to the affected area. Do not apply a cold pack directly to the skin, as this can cause further injury.

When a person applies ice to a new bruise, it helps to slow bleeding down and lessen the swelling. This can reduce the overall size of the bruise, as it prevents blood from leaking further and reduces inflammation.

Many people use arnica, quercetin, vitamin B-3, or vitamin K creams to help speed up bruise healing times.

People can also use over-the-counter pain medicine, such as acetaminophen (Tylenol) and nonsteroidal anti-inflammatory drugs (NSAIDs) to reduce pain and inflammation around the bruise. Avoid aspirin, as it can increase bleeding.

Avoiding NSAIDs may also be necessary when bruising occurs after surgery or with extensive bruises, as these drugs risk worsening the bleeding. People should check with their doctor before taking any NSAIDs if they have this bruising.

The use of a soft elastic wrap, during waking hours, for the first 1–2 days can help decrease bruising and discomfort after an injury.

Elevating the bruised area has a similar effect to icing the bruise. It helps prevent the bruise from getting bigger. The individual should raise the affected area to a comfortable position.

A person should seek medical attention any time they have the following symptoms or issues associated with bruising:

Those taking prescription blood thinners, such as warfarin (Coumadin), should notify their doctor if they experience any falls or signficant injuries.

A doctor can help determine if there is a more severe condition or cause of the bruising that the person does not know about themselves.

In rare cases, bruising can indicate more serious conditions including:

Bruising takes on many colors as the body works to heal an injury. It is normal for a bruise to change color over time. A person can expect about four phases of colors to a bruise before it fades away.

If a bruise does not fade, becomes worse, or other issues accompany it, a person should consult a doctor. Otherwise, most bruises should heal within about 2 weeks with no medical treatment.

Some of the at-home methods to speed up healing that we list in this article are available online: