What to know about premenstrual syndrome (PMS)

Premenstrual syndrome, or PMS, refers to the physical and psychological symptoms that females experience in the week or two leading up to their menstrual period.

Headaches, bloating, cramps, and mood swings are among the most common PMS symptoms. For some, these symptoms are a minor inconvenience. For others, the symptoms can be so severe that they miss work or school.

Most females experience some degree of PMS. In fact, report experiencing PMS symptoms in the week or two before their period.

In this article we look at PMS, including its symptoms, causes, treatments, and tips for coping. We also discuss when a person should see a doctor about their symptoms.

PMS refers to the diverse range of physical and psychological symptoms that people experience before their menstrual period.

The exact cause of PMS remains unknown. However, natural fluctuations in hormone levels, especially those of estrogen and progesterone, in the week or two before menstruation are likely responsible for the symptoms.

Estrogen and progesterone levels decrease dramatically after ovulation. This could play a major role in the development of PMS symptoms.

The drop in estrogen levels may affect a person’s serotonin levels. Serotonin is a brain chemical that helps regulate mood, sleep, and appetite, all of which PMS affects.

Severe or debilitating PMS symptoms are not common, and they may indicate the presence of an underlying health condition. Speak to a doctor about any severe PMS symptoms. 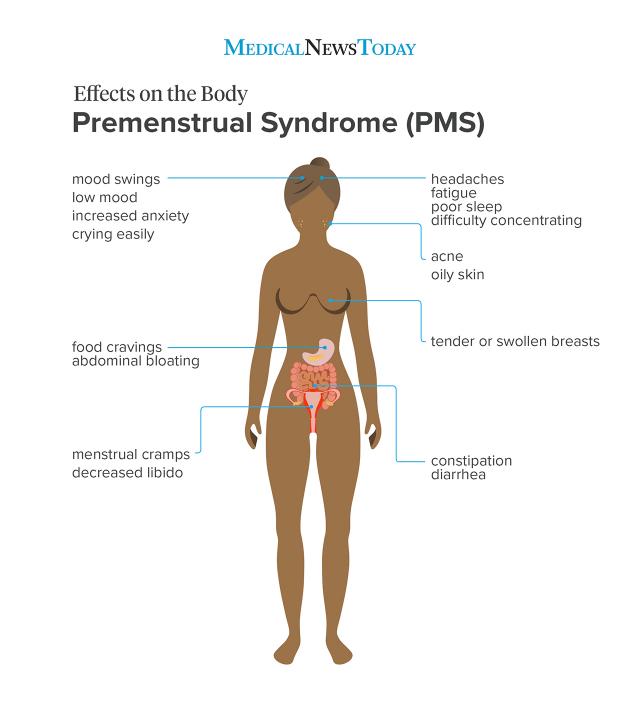 PMS symptoms range from mild to severe. Some people get their periods without experiencing any PMS symptoms at all.

For other people, however, PMS symptoms can significantly affect their ability to perform regular activities and may even reduce their quality of life.

Physical symptoms of PMS can include:

Psychological symptoms of PMS can include:

In PMS, people may also notice that the symptoms of conditions such as diabetes, depression, and inflammatory bowel syndrome worsen.

Also, age can affect the severity of PMS. During perimenopause, which is the transitional period leading up to menopause, people worsening PMS symptoms.

People may not realize straight away that their symptoms are related to menstruation, especially if they have an irregular cycle.

Keeping a diary of when symptoms occur can help a person notice patterns. If symptoms occur at roughly the same time each month, or at the same stage in a person’s menstrual cycle, they may be due to PMS. If not, the symptoms may have another cause.

Severe or debilitating PMS symptoms are not common. Speak to a doctor if PMS symptoms get in the way of daily life. In some cases, severe symptoms may indicate premenstrual dysphoric disorder (PMDD) or another medical condition.

Some conditions affecting the reproductive system, such as endometriosis and polycystic ovary syndrome, can cause severe PMS. A doctor can help treat these conditions and reduce a person’s symptom frequency and severity.

People may want to consider seeing a doctor if their PMS symptoms do not improve after trying over-the-counter (OTC) medications, home remedies, or lifestyle changes.

Sometimes, taking hormonal contraception can give rise to PMS-like symptoms. This is because these drugs change the levels of hormones in the body.

These symptoms may be less predictable depending on the type of contraception a person is using. People may notice their symptoms get better after they change birth control.

How common is PMS?

Estimates for how common PMS is vary.

The Office of Women’s Health explain that of females report experiencing some PMS symptoms.

A into premenopausal females reported that although 75% experience at least one PMS symptom, only 8–20% meet the clinical criteria for a diagnosis of PMS.

According to the American College of Obstetricians and Gynecologists, a healthcare provider will make a clinical diagnosis of PMS when:

A smaller number of people experience a severe form of PMS called PMDD.

How can I treat PMS?

Treatment options for PMS vary depending on a person’s specific symptoms.

Taking OTC and prescription medication can help relieve painful symptoms, such as abdominal cramps and headaches.

Examples of medication that people take to treat PMS include:

For severe PMS symptoms, a doctor may recommend that a person starts taking hormonal birth control pills to reduce PMS symptoms. These drugs work by affecting the levels of estrogen and progesterone in the body.

Speak to a doctor about severe PMS. They may prescribe medications to relieve depression, anxiety, or other mood-related symptoms.

Managing stress and using relaxation techniques, such as deep breathing or meditation, can help regulate emotional imbalances due to PMS.

Other examples of stress management and relaxation techniques include:

A involving college-age females found that 1.5 hours of aerobic exercise each week led to improvements in the following physical PMS symptoms:

It is worth noting that uncontrolled external factors, such as sleep patterns, nutrition, and the participants’ living environments, could have affected these results.

In contrast, the results of a did not find a significant association between physical activity and improvements in PMS symptoms.

Bloating can make a person feel heavy and lethargic. People can reduce PMS-related bloating by:

Learn more about how to relieve menstrual bloating here.

Menstrual cramps usually arise a few days before the period starts and can last for several days. Trying home remedies such as applying heat to the abdomen, doing gentle exercise, trying massage, and using essential oils can help.

Learn more about how to relieve menstrual cramps here.

Making some dietary changes may reduce mild to moderate PMS symptoms. The following are some examples of nutrients that may help a person manage their PMS symptoms:

Most females experience at least one symptom of PMS. Fluctuations in hormone levels might play a significant role in PMS, but the exact cause remains unknown.

A small percentage of people can develop a severe form of PMS called PMDD.

People may wish to see their doctor if symptoms do not improve, if they worsen despite treatment, or if they interfere with their ability to perform daily tasks.