What to know about the Norwood scale and male pattern baldness

Knowing this can help doctors make an accurate diagnosis and identify the best treatment options for each individual. Some doctors may use their own scales, though they tend to be similar to the Norwood scale.

Keep reading to learn more about the stages of the Norwood scale, some treatments for male pattern baldness, and tips on hair health and how to cope with hair loss.

Stages of the Norwood scale 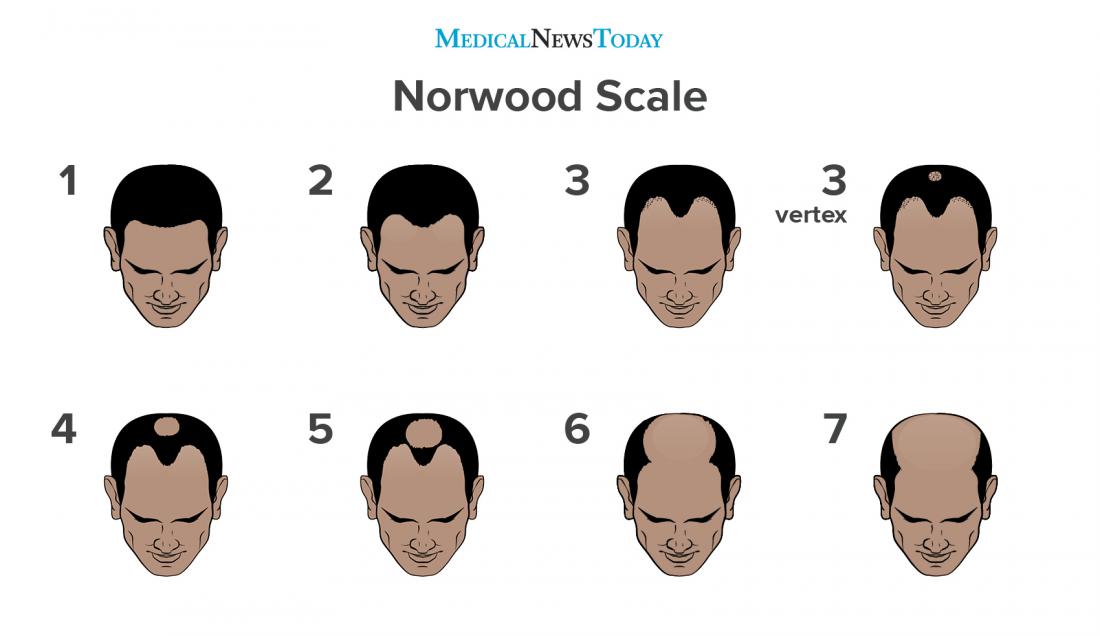 James Hamilton introduced a scale to measure the stages of male pattern baldness in the 1950s. Dr. O’Tar Norwood then significantly improved this scale in the 1970s.

The Norwood scale defines seven stages of baldness, with specific models for each type of baldness. Each stage has a normal pattern and a class A pattern.

The normal pattern tends to start with a bald spot on the top of the head. Class A balding has a different progression, wherein the hairline recedes from the front to the back instead.

Stage 1 of the Norwood scale is the control stage. People in stage 1 of male pattern baldness still have a full head of hair, with little to no signs of baldness or a receding hairline.

In stage 2, there is only slight evidence of a receding hair line, generally around the temples.

Generally, hair loss starts to become noticeable during stage 3. The hairline typically pulls backward from the temples, giving it a curved “M” shape when viewed from above.

In the class A version of the scale, or stage 3A, the dips in the hairline may be slightly less defined.

In terms of the receding hairline, stage 3 vertex balding is a less drastic version of stage 3.

However, people experiencing stage 3 vertex balding will also begin losing hair on the crown of their head. This often starts as one small bald spot.

By stage 4, there is significant hair loss. The hairline recedes farther and may start to resemble a “U” shape when viewed from above.

The bald spot on the crown is larger, but there is still a strip of hair between the bald spot and the receding hairline.

In stage 4A, a person will not experience a bald spot on the back of their head, but they will instead lose the dips in their hairline and have a deeper “U” shape when viewed from above.

Stage 5 shows similar progression to stage 4 but is more severe. There is still a small section of hair between the receding hairline and the balding crown. However, this strip of hair is much thinner than in the previous stage.

In stage 5A, the hairline continues to progress toward the back of the head.

Someone with stage 6 baldness is now mostly bald on the front and top of their head. The two bald areas now join together, and there is no strip or patch of hair between them.

There may still be hair on the sides of the head, but the crown and front of the head are now mostly bald.

By stage 7, the baldness also begins to affect the sides of the head, until only a thin ring of hair encircles the outside of the head.

The hairs that grow are likely to be very thin and weak.

There are many solutions available for male pattern baldness. Most treatment options have the best success rates when the hair loss is in its earliest stages.

Those who begin treating hair loss in its later stages may only benefit from some of the stronger treatment options, such as surgery.

The sections below list some of the treatment options available for hair loss.

Minoxidil (Rogaine) is a medication that the user can apply directly to the scalp. It is available in the form of a foam and a liquid solution, which makes application fairly simple. Minoxidil may help thicken the hairs and promote hair growth on the scalp.

However, it can take some time for the results to become obvious. In fact, the American Academy of Dermatology suggest that results may not appear until 3–6 months of using the product.

However, there is little clinical evidence to support their usefulness in treating male pattern baldness.

Finasteride (Propecia) is a prescription drug that doctors may recommend for significant hair loss. The Food and Drug Administration (FDA) have approved this drug for hair loss.

Some medical procedures may be able to replace hairs or change the scalp itself to reduce the appearance of baldness. The following options are available:

Covering the bald areas with small tattoos may help create the appearance of hair in the area. This works best with very short, buzzed haircuts.

During this procedure, a surgeon removes small patches of healthy hair follicles from the scalp and implants them into balding areas to reduce the appearance of baldness.

Microneedling uses a device containing hundreds of tiny needles to penetrate the skin and stimulate hair growth. It is best to work directly with a dermatologist to determine whether or not microneedling will be helpful.

There has also been into including platelet-rich plasma in the procedure of microneedling to further improve hair growth.

During this procedure, a doctor inserts small devices under the scalp that will remain in place for a few weeks to stretch the skin and reduce the appearance of a receding hairline or bald spots.

A doctor may recommend surgically removing parts of the scalp that have no hair on them, bringing the areas that do have hair on them closer together.

They may recommend a scalp expansion procedure beforehand to make the process easier.

Learn more about the costs and types of hair transplants here.

Aside from the procedures and medications listed above, there are a number of things a person can do to promote healthy hair growth, including:

Though many people find ways to treat mild forms of baldness, it will likely increase with age.

How a person chooses to cope with hair loss is up to them. Some make adjustments to their treatment in order to keep their full head of hair for as long as possible. Even so, treatment options may not be as successful as the person ages and their hair becomes thinner and weaker.

Others may choose to find more permanent options, such as hair transplants. Other people may decide to wear hair pieces or head garments to cover up their baldness.

Some choose to shave their head entirely, instead of seeking treatment.

It is important to remember that male pattern baldness is a normal part of aging and not something to be embarrassed about or ashamed of.

Balding and hair loss are very common, especially as people get older.

Understanding the Norwood scale and which stage of male pattern baldness a person is at can help them work with doctors to discover the best treatment options.

There are a number of treatment options available to help treat male pattern baldness, and the results of each can vary from person to person.