The typical pregnancy has three trimesters and lasts around 40 weeks from the first day of a woman’s last period. In each trimester, the fetus will meet specific developmental milestones.

While 40 weeks is the usual time frame, a full-term baby can be born as early as 37 weeks and as late as 42 weeks.

Read on for more information about what to expect during each pregnancy trimester. 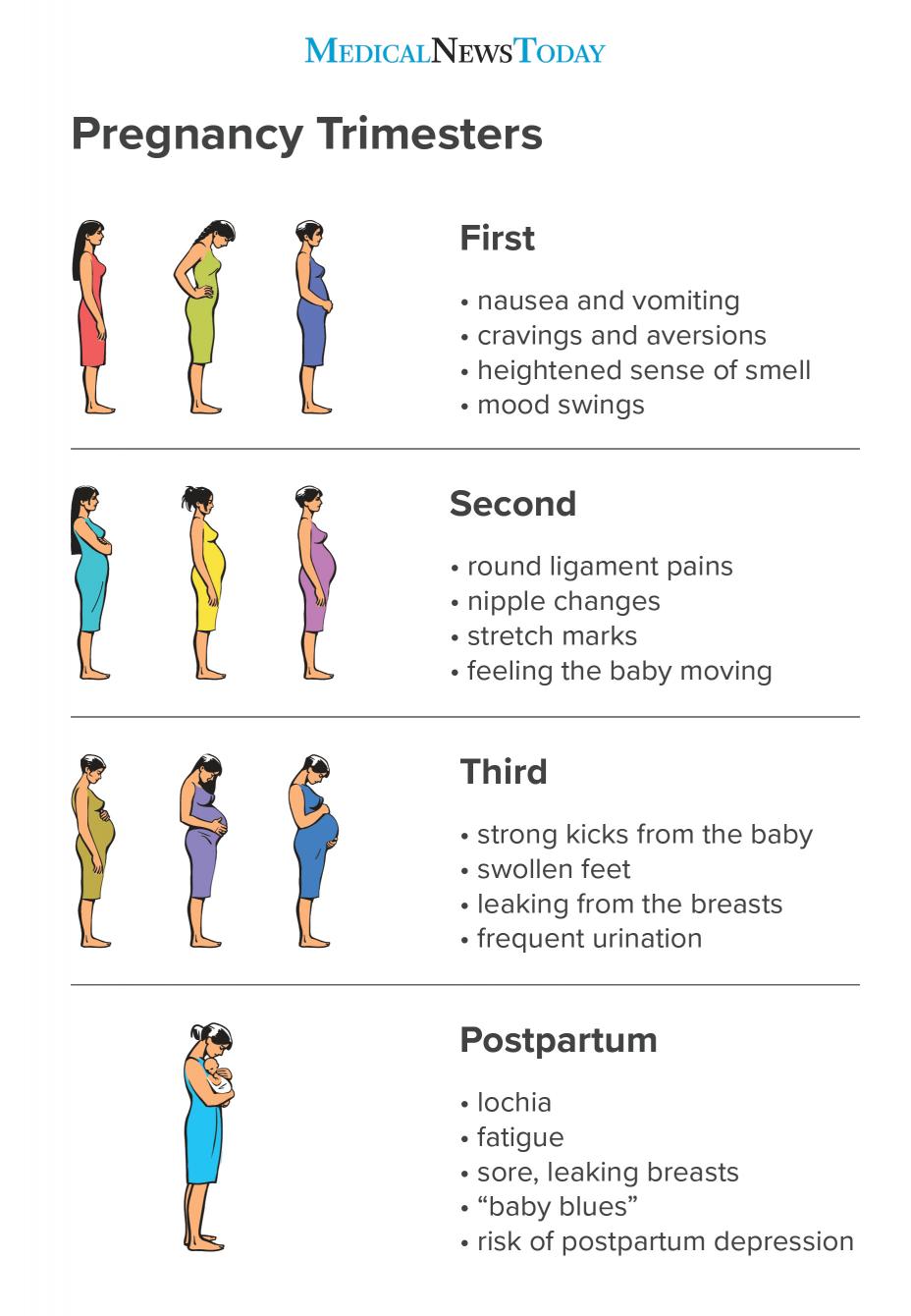 The first trimester lasts for the first 12 weeks of the pregnancy and is crucial for the baby’s development. At conception, the egg and sperm combine to form a zygote, which will implant in the uterine wall.

The zygote becomes an embryo as the cells divide and grow. All of the major organs and structures begin to form.

The fetus’s heart rate can be heard as early as 8 weeks on a doppler in the doctor’s office, but more likely closer to 12 weeks. During the eighth week the eyelids remain closed to protect its eyes. The fetus can also make a fist at this stage. Also, external genitalia will have formed and may be visible during an ultrasound, meaning that a doctor can tell someone whether the fetus is male or female.

A woman will experience many changes during the first trimester, too. Many women will start to feel morning sickness, or nausea and vomiting due to pregnancy, at 6–8 weeks.

Despite its name, this nausea does not just occur in the morning. Some pregnant women get sick at night, while others are sick all day.

A pregnant woman might also feel very tired and notice that she is more emotional than usual due to hormonal changes.

Many also report experiencing food cravings or aversions during early pregnancy, alongside a stronger sense of smell. Breast tenderness is also very common.

The second trimester lasts between week 13 and 26 of pregnancy. The fetus will go through a lot of changes during this time and grow from approximately 4–5 inches long to around 12 inches long.

During the second trimester, the fetus will also go from weighing about 3 ounces to weighing 1 pound (lb) or more.

In addition to the major structures and organs, other important parts of the body will also form during the second trimester, including:

The fetus now has regular sleeping and waking patterns. They can also hear sounds from outside the womb, and they will begin to practice swallowing, which is an important skill after delivery.

The woman will also likely begin to feel better. In most cases, morning sickness and fatigue start to go away at the beginning of the second trimester. Food cravings and aversions can continue, however.

A woman may notice that her belly is starting to grow and that she is beginning to “look pregnant.” She should also start to feel the baby moving, which is called “quickening.”

Braxton–Hicks contractions may start toward the end of the second trimester.

A woman may also begin to experience other symptoms in the second trimester, including:

Most of the organs and body systems have formed by now, but they will continue to grow and mature during the third trimester.

The fetus’s lungs are not fully formed at the beginning of this trimester, but they will be by the time of delivery.

A growing baby will start practicing breathing motions to help prepare for life after birth. Kicks and rolls become stronger, and a pregnant woman should feel the baby move regularly.

A pregnant woman may also begin to feel uncomfortable during this trimester, as her belly starts to grow. Most women start to feel Braxton–Hicks contractions getting stronger, and they may have back pain from carrying a heavy belly.

Other symptoms that a pregnant woman may experience during the third trimester include:

As the woman gets closer to the delivery, the baby should turn in to a head-down position to make birth easier.

Anxiety about delivery and parenthood are also common toward the end of pregnancy.

Many people unofficially call the baby’s first 3 months of life the fourth trimester, or the time when the baby adjusts to life outside the womb.

Human babies are born very immature compared with most other mammals. Many baby mammals can stand up and walk within hours of birth.

Human babies have large brains, so they must be born at 9 months’ gestation. If the birth occurred any later, it would be very dangerous because their heads might not be able to pass through a woman’s pelvis safely.

Since they are still very immature, newborn babies need constant care during their first few months of life.

This period can be very difficult for both the baby and their caregiver. Keeping the baby calm means replicating life in the womb as closely as possible. This can be accomplished by:

The fourth trimester can be challenging for new parents. It is vital to rest as much as possible.

To make this time a little easier, try to accept help from family and friends. This help may be in the form of meals, babysitting older siblings, and cleaning or laundry as needed.

A woman will experience lochia, or bleeding and vaginal discharge, that continues for 4–6 weeks after birth. Her breasts may be sore and leak as she adjusts to breastfeeding.

Many women experience mood swings, or “baby blues,” after birth. This is usually due to the fluctuation in hormones.

Some women may experience postpartum depression after childbirth. This includes feelings of intense sadness, fatigue, anxiety, and hopelessness that can affect her ability to care for herself and the baby.

Postpartum depression is treatable, so anyone experiencing these symptoms should speak to a doctor as soon as possible.

Postpartum, or the ‘fourth trimester’

Pregnancy, childbirth, and the first few months with a newborn are unlike any other time in life. They are full of new experiences, great uncertainty, and many new emotions.

Getting regular prenatal care is vital during each trimester. A doctor can help ensure the growing baby is meeting their developmental milestones, and that the woman is in good health.